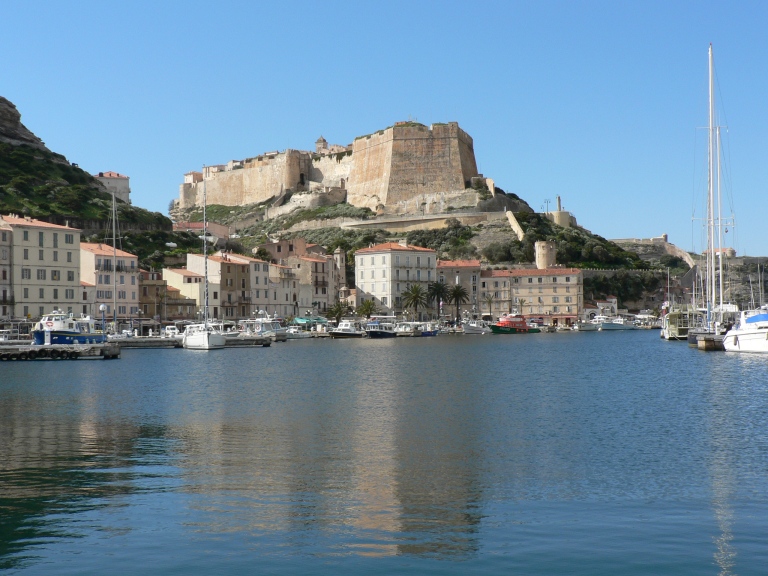 Time to plan the annual family vacation. It happens every year, though it never gets any easier to select a destination. Someone wants a gorgeous location to explore, while others won’t move too far away from the beach. Historical sites are a must for many, though one person usually prefers to get to know the locals at popular bars. It’s so hard to please everyone. Maybe it’s time to give Bonifacio a try.

There’s a little something for everyone on the southern coast of Corsica, an area founded by the Tuscans, built by the Genoese, and claimed by the French. Perched on the edge of dramatic white limestone cliffs, Bonifacio’s Old Town is a narrow maze of cobblestone streets and historic buildings. The fjord-like marina is lined with upscale restaurants and filled with impressive yachts. Protected nature reserves, sheltered coves, and the powerful Mediterranean Sea spread out from the center of town. The seven-mile-wide Strait of Bonifacio separates Corsica from Sardinia, making the Italian island an easy day trip and influence over France’s southernmost commune.

Make Hotel U Capu Biancu your home base. Located northeast of the city on the peaceful Gulf of Santa Manza, the hotel has rustic wood and stone suites and panoramic views of the sea. Watch passing boats from the heated pool. Sip sparkling Muscat cocktails at the waterfront restaurant. Lounge on one of the two secret beaches. Paddle a canoe around the rocky shoreline. Explore the granite Lavezzi Islands on a Boston Whaler. Or hike the Aiguilles de Bavella. Keep a look out for wild mountain sheep along the way.

Having satisfied the nature lovers, head into the city for a cultural fix. The 9th century citadel sits on a promontory overlooking the water. Sardinia is in the distance. Hike the narrow King Aragon Steps, which were cut into the limestone for water to be carried up to the citadel from the sea. Torra di Sant’ Amanza and Torra di Sponsaglia, two 16th century Genoese towers, were built to protect Bonifacio from relentless pirates. Don’t miss Église Saint-Dominique de Bonifacio. The 13th century former Dominican convent is the largest church on the island. No matter where you go, there are stunning views of the sea.

The tippler of your group has been waiting patiently, so after exploring the Old Town, stop by the Kissing Pigs. Glasses of Sciacarello and Vermentino, plus the moitié-moitié platter–a combination of local meat and cheeses–should make everyone happy. And if not, they’re free to plan next year’s trip.

This site uses Akismet to reduce spam. Learn how your comment data is processed.